Take in the season with a hot beverage and a couple of these cold weather movies and TV shows. 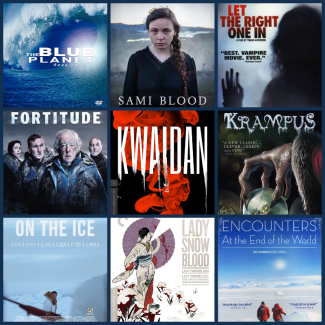 Need help settling into winter? Look no further than this multi-genre list of film and TV recommendations:

A play on the name Snow White and a source of inspiration for Quentin Tarantino’s Kill Bill, this manga-based film follows a young woman born during a blizzard and trained in the bloody art of vengeance.

If you’re interested in a multi-lingual horror/sci-fi mystery about climate change that takes place in the Arctic, check out the TV series Fortitude.

Set in Barrow, Alaska, the lives of two Iñupiaq teenagers are changed forever after a horrific accident while seal hunting.

Let the Right One In

The cold winter landscapes of Sweden set the mood for this dark thriller about a vampire child that befriends a young boy. Based on the novel by John Ajvide Lindqvist.

Many associate reindeer with Christmas and Santa Claus, but reindeer husbandry has been a way of life for the Sámi people of the Northern Arctic long before becoming a part of the pop culture holiday mythos. In fact, the appropriation that has since followed is rooted in a history of oppression explored in the film Sami Blood - the story of a young girl’s experiences with racism at a Swedish boarding school for Sámi children and her life-long struggle with identity.

This modernized folktale weaves together issues of family dynamics and consumerist culture into a holiday lesson for us all.

Take in the magnificent scenery and animal life presented in Episode 4 of The Blue Planet series, “Frozen Seas.” Explore the Arctic through the eyes of foxes, polar bears, seals, killer whales, and more.

In “The Woman of the Snow” story, featured in the anthology horror film Kwaidan, a man must face the consequences after telling his wife about a secret encounter years earlier with a supernatural entity during a blizzard.

Encounters at the End of the World

Werner Herzog travels Antarctica talking with the scientists who live in and research the world’s most desolate continent.

Megan works at the Main Library Teen Center. She enjoys crafting, board games, and horror and sci-fi films. Reach out to her if you're looking for something new to watch.