This Veteran's Day marks the 100th Anniversary of the signing of the Armistice between the Allied Countries and Germany, ending the hostilities on the Western Front of the War and officially beginning the end of World War I.

"The eleventh hour, of the eleventh day, of the eleventh month" is the exact date and time that the Armistice between the Allied Countries and Germany began in 1918, temporarily ending hostilities during World War I. This upcoming Veteran's Day marks the 100th anniversary of this momentous event. In honor of this, and for all veterans who've served our country, here's a look-back to 100 years ago, when the Armistice was signed, the creation of the holiday to remember it, and how Tennessee responded to the War (clearly I'm not going in chronological order). 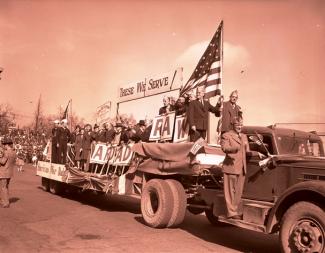 History of World War I and Armistice Day

The first World War (or the Great War, as it is sometimes referred to) was a long, 4-year campaign, that began with the assassination of Archduke Franz Ferdinand, the heir to the Austro-Hungarian Empire, on June 28th, 1914. The two sides were the Central Powers (Germany, Austria-Hungary, Bulgaria, and the Ottoman Empire) vs. the Allied Powers (Great Britain, France, Russia, Italy, Romania, Japan, and the U.S.). The U.S. joined the fight in 1917. By the time the Armistice was signed and the Allies had claimed victory, a total of 16 million people were killed due to this war—both soldiers and civilians. While the Armistice ended the fighting, it was the Treaty of Versailles that officially brought the war to an end.

The following year on the first anniversary of Armistice Day, the U.S. honored the date with a celebration of parades and a brief suspension of business beginning at 11 a.m. President Wilson proclaimed the date as the first commemoration, with the words:

"To us in America, the reflections of Armistice Day will be filled with solemn pride in the heroism of those who died in the country's service and with gratitude for the victory..."

And a few more dates important to Armistice Day becoming a holiday...

President Woodrow Wilson was reportedly a pacificist, and clearly wanted to avoid involvement in the war until absolutely necessary. That didn't stop the U.S. from preparing themselves for war though, and this is when Tennessee initially became involved. The National Guard was created, taking over the state militia units. Though these units remained with each state, legislation was passed in 1916, establishing that the National Guard would fall under complete federal control during times of war or grave public emergency.

Despite the Guardsmen's dissatisfaction of their assignment (and an unsuccessful lobbying for their return home by Christmas, by the state's governor and the TN delegation in Congress), most of the men remained there until March 24th, 1917. When they returned home, it was unfortunately a short vacation for many, because 2 weeks later (on April 6th), the U.S. formally entered the war. 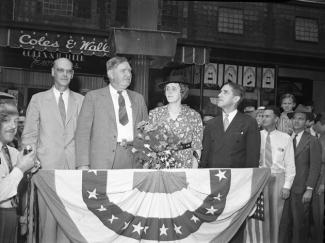 Nashville Families in the War

And as I'm talking about notable Tennesseans who served in World War I, Metro Archives actually holds a few collections of veterans who've served in not just World War I, but in several other U.S.-involved conflicts. But in honor of the 100th anniversary of Armistice Day, these collections below are strictly from World War I veterans...

Clarence Alford was a native Nashvillian and Hume-Fogg graduate. Alford enlisted in the National Guard of Tennessee in 1917, and hoped to then join the U.S. Marines. He was turned down due to his poor eyesight. He was still interested in serving, however, so the company he worked for at the time (Abb Landis) helped him join the military. Alford was assigned to Supply Company #323 in Camp Johnston (after arriving in Fort Oglethorpe in June, 1918).

When his company was sent to France, it was August, 1918. In September of that same year, Alford was transferred to the Military Justice Hospital Group that operated out of the town of Toul, France. There, he worked as a payroll clerk in the finance office, where he determined the pay for the doctors, nurses, and ever-rotating group of sick or injured servicemen in the hospital group. Alford remained working in the finance office even after the Armistice was signed, until April 1919. He then was transferred to another town in France, working the same job. He was eventually relieved of his duties, returning home on June 6th, 1919.

Though the bulk of Alford's collection consists of correspondence during his war years (including a letter he wrote on Armistice Day), it also includes photos, military records, post cards, and travel guides. Check out some of his postcards, letters, and photos in the slideshow below. A few materials from his collection, including his journal, are currently on display in Metro Archives' Veteran's Day exhibit.

This is another intriguing collection currently on display in our Veteran's Day Exhibit. Primo Bartolini was born in Fanano, Italy, in 1889, but immigrated to the U.S. in 1907, becoming a naturalized citizen in 1921. When the U.S. entered the war, and President Wilson promulgated the Selective Service Act of 1917, Bartolini didn't hesitate. His number 854 was drafted, and he became the first foreign-born Nashvillian to enter World War I.

During his service, his ability to speak several foreign languages fluently led him towards a job as an interpreter for the Army in Vancouver, Washington. He was later awarded the Cross of the Knights of the Crown from King Victor Emmanuel III of Italy for his services.

Among his collection on display in the exhibit, you can also see some of this poetry as he was an avid writer of poetry throughout his life. Some of these items are also included in the slideshow below.

Similar to the Clarence Alford Collection, the Marsh Collection consists of various materials such as correspondence, photos, and ephemera from a Nashville family. But where it differs is that it covers more members of the family, and also the family's business.

Most of the photos in the slideshow below are unidentified in subject and location, but show more of the conditions that soldiers lived and worked in.

This is a collection primarily made up of photos, from two Nashville families - the McClanahans and Weakleys (related by marriage). While a lot of their photos are from around Nashville at the turn of the century (great photos too), there are also some from one of the family members that was a veteran. The name of this family member is unknown, but the photos include himself with (assumably) other family members who became nurses. Maybe, I'm not sure.

Items from World War I Collections

I've already mentioned the exhibit in Metro Archives at least once, but here's the official description...

Another way that Metro Archives and the Library is honoring the 100th anniversary of Armistice Day, is through an exhibit we currently have on display in our reading room. The "100 Years of Veterans Day" exhibit includes materials commemorating veterans from World War I up to the War on Terror, with special emphasis on Nashvillians that served. It'll be on display through January 3rd of next year, please come check it out!

My next blog post in a couple of weeks will be about the ever-favorite topic of the Flu! Stay tuned!