If you've never heard of Frank Turner, let me introduce you to one of my all-time favorite musicians. 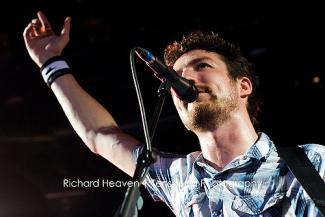 Even though I now live in Music City, I don't get out to shows that often. For one, I'm not big on crowds or trying to find decent parking downtown. But I've also been spoiled by going to Frank Turner shows.

At the time of writing this, Frank Turner has performed over 2,200 shows since 2005, and after all that practice, it's not surprising that his shows are phenomenal. He loves the road, and he loves playing music for people. He has this ability to make people feel welcomed and included, and he creates a sense of comradery in the audience. I've seen him twice already, and when he comes back to Nashville this October, you better believe I will be out there in the crowd, singing along at top volume with everyone else.

If you want to join in on the fun, here are a few song picks to get you started on all things Frank Turner.

This is one of Turner's first solo albums and it is filled with pub anthems and driving ballads. Turner grew up in South Engalnd, and many of his songs are autobiographical. "I Knew Prufrock Before He Got Famous" for example is all about spending time with some of his best friends and making the most of that time. Other stand out tracks include "Love, Ire, and Song," "Photosynthesis," and "Long Live the Queen."

I think this is my favorite album, although that tends to change from day to day. This album really looks at England as a whole and has really strong writing on every track. "One Foot" is especially stunning, and "I Am Disappeared" is my favorite song of all time. Period. It reminds me that no matter what the situation is, I'm not stuck. "Rivers" and "Wessex Boy" are both excellent, and "English Curse" is worth a listen as it's Turner's only acapella song.

Whereas all of the albums up until this point have been on the more pessimistic side, with Tape Deck Heart, you get the sense that Turner is changing. It opens with "Recovery" which sets the tone and presents Turner as someone who is cautiously optomistic that things will get better, even though it's going to be a long and difficult journey. "Four Simple Words" makes you wanna dance and jump and scream and sing. It's the perfect rock show jam. I'd also encourage people to listen to "The Fisher King Blues" for it's Nashville shout out and "Broken Piano."

Released earlier this year, Be More Kind is a new sound for Turner. You can hear how he has evolved as a musician as well as a human being. The album is joyous and catchy. "There She Is" is the first happy love song I've heard by Turner. And while I've always personally found the optomisim in Turner's lyrics, this album is genuinely optomistic, with tracks like "Be More Kind" and "Little Changes." I'd also give "1933" and "Brave Face" a listen.