It's been 50 years this month since the death of Dr. Martin Luther King, Jr., yet his actions and teachings have lived on every day since. Coincidentally, the date of his actual birthday this year was celebrated on the same day of the holiday honoring him. In honor of his legacy, here's a look back at how his work affected Nashville...

It's hard to believe that it has already been 50 years since the passing of Dr. Martin Luther King, Jr., yet the legacy of his work has not been forgotten a day since. 50 years ago this month (April 4th to be exact), Dr. King was staying at the Lorraine Motel in Memphis, TN, when he was shot and killed by James Earl Ray while standing on the balcony, outside his room. That hotel today is now a museum, dedicated not only to his memory but also for the struggle and achievement of the Civil Rights Movement - National Civil Rights Museum at the Lorraine Motel. 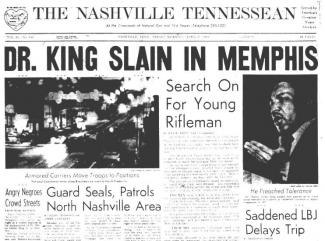 While visiting Memphis a few years ago for their Beale Street Music Festival, I made a trip to this museum as well. One thing I enjoyed most was their ability to create an educational space out of a building that was also being treated with reverence. I wasn't aware of the destination I was walking towards while going through the museum, until I came to the end at the well-preserved hotel room he stayed in, and the balcony that was the last place he stood. If you haven't already, add this city and the museum to your vacation list because it is beautiful and a must-see destination.

While his assassination was heart-breaking and devastating, it was not in vain. Like a vine, his work to inspire non-violent protests against racism and injustice against African Americans spread throughout the country. Nashville is a great example of a city that took his teachings and ran with them.

A visit to the Civil Rights' Room here at the Downtown Library, in Special Collections, is a good way to experience and learn more about the city's involvement in the Civil Rights Movement. I also greatly encourage you to visit there if you haven't already. But if you're not able to visit the Civil Rights room, here's a brief history of Dr. King's influence on the city...

NCLC and the Student Sit-In Movement

One of Dr. King's successful initiatives during the Civil Rights Movement was the coordinated founding of the SCLC, or the Southern Christian Leadership Conference, just after the Montgomery Bus Boycott. Due to the success of this boycott, a meeting was set-up in 1957 to bring together individuals from several states to establish an organization with the mission to end segregation in all forms, specifically in a non-violent manner. Dr. King was elected to serve as the initial president of the organization when it was founded. And the organization actually just celebrated its 60th anniversary.

The success of SCLC proved to be far-reaching to other communities, who then formed their own organizations with the same mission. Nashville's chapter, similarly-named to its mother group as the Nashville Christian Leadership Council, was founded and lead by Rev. Kelly Miller Smith (see photo in news clipping below), who believed as King and the other members of the SCLC did - that non-violence was the best path towards achieving integration in all institutions.

From the 1963 news clipping below, Smith was quoted as saying the following about the organization's mission:

"No methodology, including law courts can do more about bringing integration than non-violent movements."

"If we are to see the real downfall of segregation and discrimination, it will be because of a disciplined Negro [sic] Christian movement which breaks the antiquated methods of resolving our fears and tension and dramatically applies the gospel we profess." 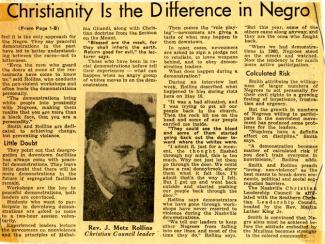 This 1963 Tennessean news clipping talks about the NCLC and the continued push for complete desegregation...

As the top news clipping discusses, the students/individuals involved in the non-violent protests first went through workshops in order to teach them the proper tactics and discipline needed to help achieve their goals. Another member of the organization that helped lead the non-violence workshops was James Lawson, an activist that spent time in India studying the principles of non-violent resistance. The teachings that were then used to help educate the participants primarily included the principles of Mahatma Gandhi and Christian doctrine from the Sermon on the Mount.

The above articles also discuss the organization's opposition to violent protests and the importance of educating their participants, to stress the need for all protests to remain peaceful despite the violent backlash they would receive.

Though the first sit-in protest to take place in the country was at a Woolworth's in Greensboro, N.C. in February 1960, NCLC's plan to protest at lunch counters was actually formulated prior to this initial event. Many months before actually. Leaders of the group approached downtown business owners for Harvey's and Cain-Sloan Dept. stores, asking that they serve African Americans at their lunch counters. The answer was sadly no. Small groups of students still pursued their mission by making purchases at each store, then sitting at the lunch counters requesting service. The answer was still no. Before further plans to protest could be formulated though, the Greensboro sit-in protest took place and spurred energy for the new form of peaceful protest.

While the NCLC was the starting catalyst for non-violent protest, the students involved eventually took over the mission as their own, forming a separate organization known as the Nashville Student Movement. The schools that the students primarily came from were: Fisk, Tennessee A&I (now Tennessee State University), American Baptist Theological Seminary (American Baptist College), Meharry Medical College, and Vanderbilt University. Both organizations began working together though, first targeting lunch counters downtown in February, 1960.

The following stores were targeted for their unequal service policies (African Americans were allowed to purchase clothing and items from the store, but still not allowed to sit at the lunch counters):

In the Library's current location, there were many other stores and businesses that were targeted for demonstrations as well, including the Tic Toc Restaurant that had a couple of locations around downtown.

On top of the sit-in protests that the students were involved in actively, they also protested by boycotting the downtown retail establishments. Despite the verbal abuse and attacks the protestors received during many of these sit-ins (including on Feb. 27th when police were not present, and a group of white citizens opposing desegregation violently attacked the protestors), their hard work paid off by May when negotiations with the merchants allowed for 6 downtown businesses to open their lunch counters to African Americans.

In between the starting of the sit-ins in February and the successful outcome by May 10th, there was a lot of push and pull between the protestors, law enforcement, the merchants, the city government and the pro-segregation supporters. This included 81 arrests of student protestors on Feb. 27th (but no arrests of any of the attackers), a Bi-racial committee appointed by Mayor Ben West to investigate segregation in the city, and a bombing at the home of Z. Alexander Looby on April 19th (lead lawyer representing the students arrested on Feb. 27th) that led to a confrontation of the Mayor and a visit by Dr. King to Fisk University. 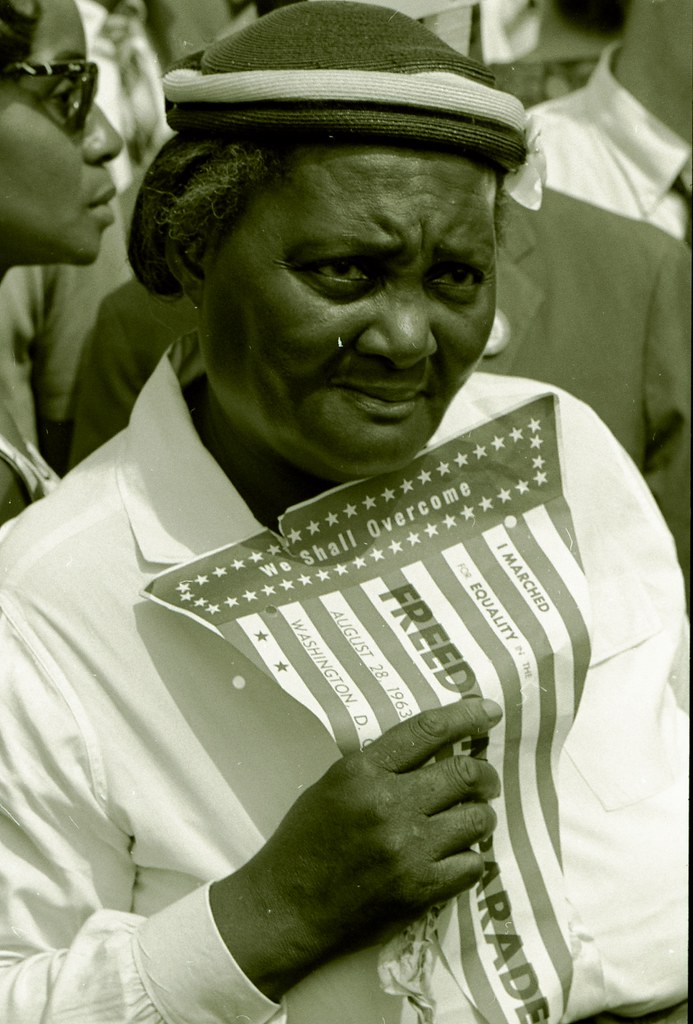 The day after the home of Z. Alexander Looby was bombed, Dr. King made a visit to Nashville to speak at Fisk University. Unfortunately his speech too was threatened with similar violent tactics, with the event being delayed for about an hour due to a bomb threat. When his speech finally began just before 9 p.m. (the event was supposed to begin around 7:30 p.m.), Dr. King said that "the diehards should know by now that bombs will not stop us" - this also referring to the home of Councilman Looby, who was lucky to not have been injured in the bombing, nor was his wife.

In the rest of Dr. King's speech to a large crowd in the gymnasium at Fisk, he commended the city for leading one of "the best organized and the most disciplined [sit-in movements] in the Southland." He said he came to Nashville to gain inspiration, not to bring it. And in reference to the progress they were making, he said...

"Segregation is on its death bed now, and the only uncertain thing about it is the day it will be buried." 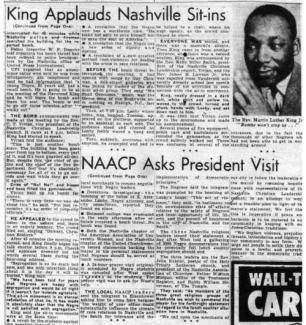 A few years later, he made another visit to Nashville. After a sit-in was staged at Morrison's Cafeteria on West End to protest their policy of segregation, Dr. King gave a speech at Fisk University (I think - the article doesn't fully identify where he spoke), urging roughly 2,000 attendees to "...keep moving in Nashville." He said...

"You have moved in a uniquely moving orbit of creative protest. Nashville, the Athens of the South, must make a stride into freedom."

When King was introduced by the Rev. D. L. Williams, Jr. of Gordon Memorial Methodist Church, he was identified as "not a man who talks but a man who acts." After his speech, Nashville Civil Rights' leaders informed the attendees that more demonstrations would take place, including a Prayer Pilgrimage that left Fisk to march to the County Courthouse in support of a public accommodations bill for Nashville.

Between the photograph collections in our department and in Special Collections, we have quite a few images of the various protests and demonstrations that took place around Nashville, during the 1960's. Some can be viewed online on the Library's Special Collections page.

Update from January 2022, I wrote another blog post about Rep. John Lewis and a Criminal Court case he and several other students were involved in after a sit-in demonstration. Click here if you'd like to read that post. 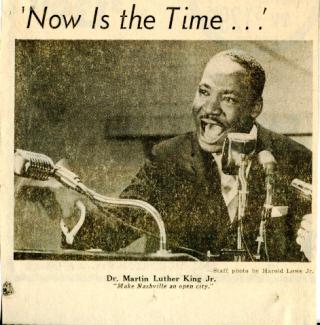 Since this month also marks the 20th anniversary of the tornadoes that hit Downtown Nashville and surrounding areas in 1998, check out our photos from the unfortunate damage the storms caused to the Titan's Stadium construction site and various neighborhoods throughout Nashville... 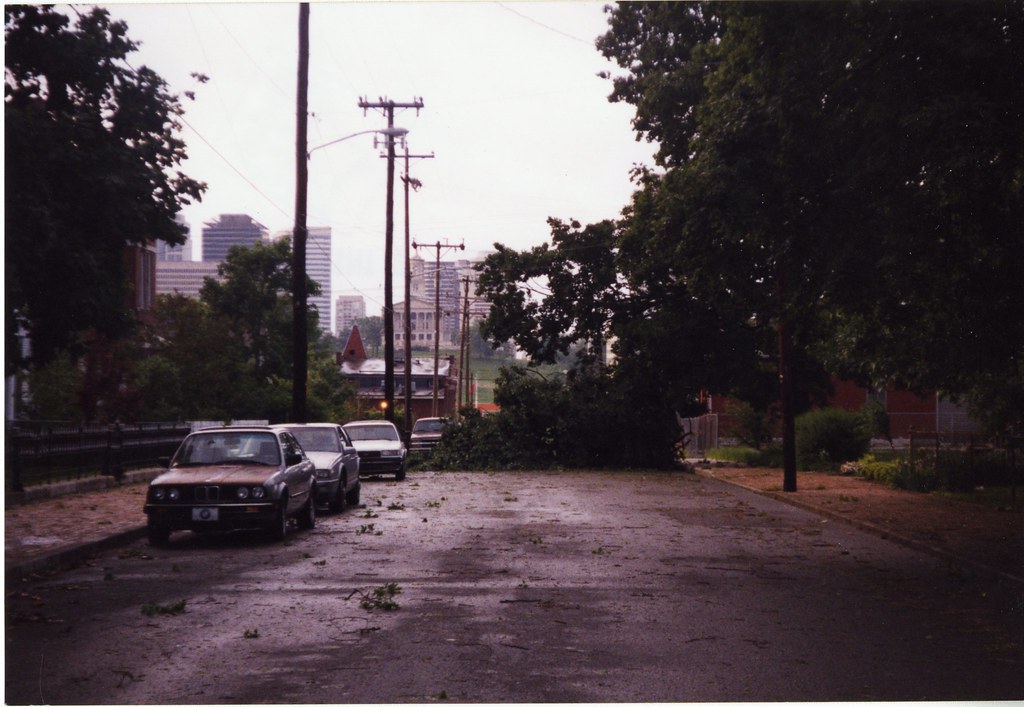 Oh, and I'll just leave this here too... 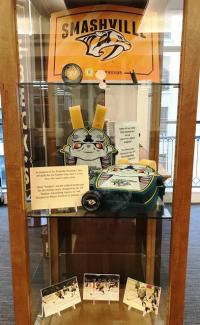