Lions and Tigers and Bears...Oh Nashville!

Prior to the opening of the Nashville Zoo in Cheatham County, in 1991, the city came close to purchasing animals for a zoo around the time the Metro Government formed (1963). I recently stumbled upon this intriguing story and thought it was too good not to share.

This may be old news to some native Nashvillians or Nashville history-enthusiasts, but I found this short little anecdote about our previous attempt at a zoo to be quite interesting. After indexing one of the most intriguing collections we have here at Metro Archives - the Dick Battle Collection (collection from a former City Government/News Reporter for the Nashville Banner newspaper) - I learned about how a small family farm in Texas almost became the start of Nashville's Zoological Park. Almost.

The Gumper family in Dalhart, Texas, were previously the owners of a small one-building zoo formed as a hobby. After the hobbyist and operator W.P. Gumper passed away, his wife and the rest of the family were not interested in maintaining it due to the continuous upkeep it required. Sidenote about the family - the family member that hired a local cattle auctioneer to put out ads for the zoo in newspapers across the southwest - his name was Forrest. That's right, Forrest Gumper. People probably called him that too.

What animals did the Gumpers have in their zoo, you ask? Pineapple Shrimp, Lemon Shrimp, Coconut Shrimp...just kidding.

That's straight from the various press releases in the file, I kid you not. And as far as the reptiles - "[they] were collected personally by the late owner, who was a familiar sight around Dalhart carrying a catching stick with a loop of rope at the end and a burlap bag." Huh?

At this time period for Nashville, the city was still in the process of planning the consolidation of its two governments, so hearing that they could have their cake and eat it too, sure why not? In this case, the cake is the consolidated government, and the zoo would be eating it. Essentially, Nashville was ready for its next big step as an emerging southern city and having a zoo to attract tourists or people to live here was highly enticing.

But purchasing the animals was the easy part. The town of Dalhart, Texas wanted to keep the zoo but they couldn't raise the asking price of $6,000. That may seem like pennies today, but not back then and not for a small town. Another sidenote about this zoo is that it was the "largest zoo between Ft. Worth and Colorado Springs" at that time. I'm not certain if that's still true, but I doubt it. Nashville had the money though; a local radio station - WLAC - pledged 11% of the cost at $695. The Tennessean jumped on the bandwagon as well to support the Zoo. And Nashville's Life and Casualty Insurance Company promised to insure the city's bid for the Zoo up to the appraised value.

But according to City Councilman, Charles R. Bramwell - there were too many other problems with this zoo that Nashville couldn't afford to deal with while they were still shuffling their governments around.

These abbreviated facts were a part of Bramwell's October, 1962 letter to James Stahlman at the Nashville Banner, emphatically asking that...

"...a good strong article [be written], giving the facts that I have quoted to you, along with some other information explaining that at the time we are consolidating two governments and trying to cut down on expenses is certainly not the time to add $175,000 to $200,000 annual outlay."

Thinking much like the Dude - "yeah, well that's just, like, your opinion, man," Mayor Briley forged ahead anyway and formed the Zoo Advisory Committee. A report was issused from the committee in May, 1963. In this report, the information is pretty self-explanatory; the committee establishes the city's desire for a zoo, the values it'll have to the city, a plan and design, budget, reports from subcommittees, and my favorite part - the "initial zoo animal list." See a couple of the pages below... 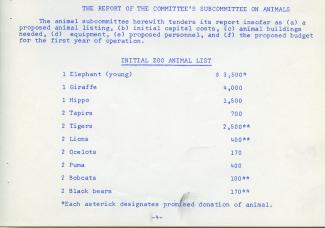 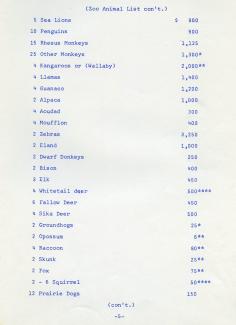 No surprise here, but the top 3 most expensive animals - Giraffes, Elephants, and Zebras. Cheapest? Opossum.

My favorite is on page 6 (not listed above), but Vultures are listed on there at $25. Because the zoo needs a clean-up crew, too.

What happened next after the Advisory Committee? Well it gets a little confusing, because one minute everyone is saying "yeah, let's do this!" And the next, the Mayor is sending out a message saying Metro does not have the funds to support this zoo (or the location). What I can confirm is that the auction for the animals took place around April 18th, 1964. Prior to that event, the Metro Park Commission had agreed to convert Fort Negley Park into a zoo. But according to the story written by Dick Battle himself, the Fort Negley location was meant to be temporary. And even still, Metro Board of Parks and Rec couldn't provide funds for site prep, initial cost, and care of maintenance. Eventually, the site was denied as well so the animals had to be returned to the owner. Check out the news clipping below that discusses this process - luckily returning all of those animals wasn't too difficult.

But, did you also know that this wasn't Nashville's first zoo (more like "attempt")? Nope. In a report/article discussing other major cities' zoos, it mentions that 30 years prior to this venture (1930's), the Glendale Zoo was a popular visiting spot for Nashville families. Glendale Park was located near present-day Lealand and Caldwell Lanes in South Nashville. At only 65 acres, the Zoo was owned by Nashville Light and Power Company, who also operated the streetcar service. Up until 1932 when the Park closed due to advancement in transportation (and the Depression), the relatively small zoo operated with a healthy amount of animals in their menagerie: Monkeys, Deer, Elk, Bison, Bears, an Aviary, and "other small mammals." See clipping below. 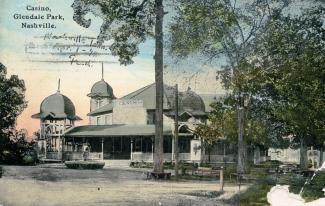 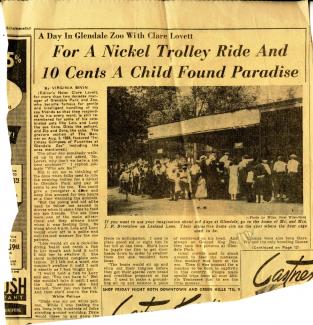 But years later, we all now know of Nashville's Zoo at Grassmere. The Zoo took over the Grassmere property (formerly the Grassmere Wildlife Park) in 1996. Check out a few pictures from the Zoo's construction and operations... 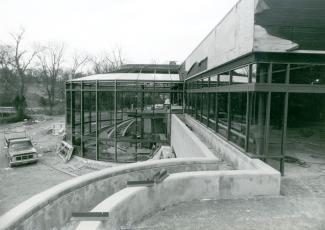 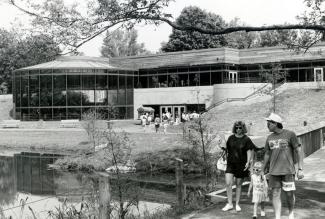