Carrie Fisher was a broad for all seasons.

Carrie Fisher, Hollywood royalty, memoirist, actress, writer, comedian and—as it turned out—a broad for all seasons, died this week. She had recently published a new memoir, The Princess Diarist, and had revived her star-making role as Princess (now General) Leia, endearing herself to a new legion of fans. 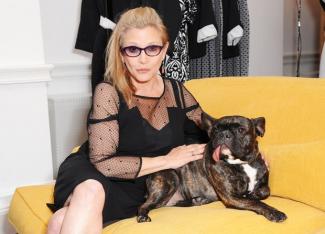 Few entertainers mastered as many genres as Carrie Fisher did. She was an unapologetic spokeswoman for mental health. She was equally as unapologetic about her recreational drug use. Carrie was a go-to script doctor in Hollywood. She wrote eloquently and honestly. She acted. She was one smart broad.

Take a look at our Carrie collection. We have a little something Carrie for everyone: the reader, the film fan, or those just looking for a kindred soul.

Postcards from the Edge

Maps to the Stars

If you do nothing else to celebrate the memory of this remarkable life, take a look as some of her most memorable quotes:

"I feel I'm very sane about how crazy I am."

“You know how they say that religion is the opiate of the masses? Well, I took masses of opiates religiously.”

"You can't find any true closeness in Hollywood, because everybody does the fake closeness so well."

“I was street smart, but unfortunately the street was Rodeo Drive.”

“My favorite one to see is the metal bikini — on men! That is what has been happening a lot. A lot. And not thin men, by the way! So that makes me feel good about myself, kind of a before-and-after thing — this is way after. Not only is Princess Leia fatter, she's a guy!”

"I tell my younger friends that no matter how I go, I want it reported that I drowned in moonlight, strangled by my own bra."

Laurie works in the Collection Development Department. She selects adult music, movies, and non-fiction titles for Nashville Public Library system. Born in Brooklyn and raised in East Tennessee, Laurie has lived in Nashville for 15 years.