Unique and frightening, this anomaly of a novel combined mystery and horror to illusory, bewildering effect. 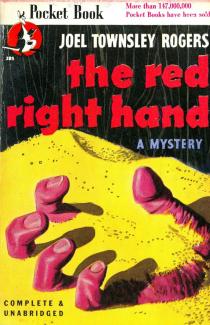 If you enjoy vintage mystery fiction, but frequently wish that the stories were a little more unpredictable, definitely more surreal, and, frankly, more terrifying, then I’ve got just the gem you’ve been looking for.

Hailing from 1945, Joel Townsley Rogers’ The Red Right Hand is a fantastic puzzle-box of a novel from yesteryear. In one sense, the story is a whodunit…but that’s kind of like saying King’s The Shining is a family drama, which we all know doesn’t really convey the vibe of the proceedings. More accurately, the mystery is a whodunit that’s been filtered through a nightmare and is happening in real time. Strange flourishes and twisty plotting aside, that may be the book’s strongest element – the fact that the killer is still at large and unaccounted for as the protagonist narrates his own attempts to solve the bizarre crime.

Rogers, who died in 1984, wrote hundreds of short stories during the heyday of the pulp magazines, as well as several other novels which, sadly, were not particularly successful and which we don’t have in the library’s collection. This is easily his most well-known work, and although there exists some blog activity regarding a rediscovery by mystery fans, this singular novel is still not well-known enough and deserves a wider audience.

While this isn’t a page-turner by today’s ‘thriller’ standards, it manages to sustain a mood of dream-like fear, and is bound to be one of the most unusual mysteries you’ve ever had the pleasure of checking out. (Bonus fact: this is the novel Kate Winslet’s character Clementine is reading in the film Eternal Sunshine of the Spotless Mind. So there’s that.)

Night of the Jabberwock