The Rim of Morning: Two Tales of Cosmic Horror

Two standout genre novels of the 30's finally get some overdue recognition. 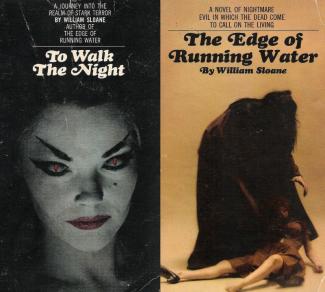 While it would have been preferable for William Sloane’s only two novels to each have their own separate reprinting, a New York Review Books reissue of the omnibus edition – The Rim of Morning – isn’t too shabby. Containing both 1937’s To Walk the Night and 1939’s The Edge of Running Water, this volume handsomely reintroduces readers to Sloane’s unfairly forgotten genre mash-up novels (before a genre mash-up was a thing). The vintage book covers shown here may not be the most accurate representation of the contents, but I couldn’t resist…I mean, look at them!

When your favorite college professor dies under mysterious circumstances, what’s the first thing you should do? If you answered, ‘let myself be mysteriously seduced by his strange, cryptic widow’, then you win! That’s the relatively straightforward premise of the first of these two short novels. But simplicity does not equal boring; the appeal of the story is the elegant way in which Sloane combines elements of mystery, science fiction, and horror into a frightening tale that is recounted as if it actually occurred.

The second novel may be even better than the first, and concerns a secluded house in rural Maine that just happens to house a brilliant scientist who really misses his recently deceased wife. Much like his first effort, Sloane’s second book once again weaves together the same three genres in varying degrees (but with much success), and is presented as a personal confession of terribly real events.

For anyone looking for the same pulpy madness that ruled horror fiction in the 30’s…there’s the door. While that style has plenty of appeal and numerous authors who crafted amazing work, these stories are written with an understated sophistication that, while not elevating them to the level of amazing literature, set them apart from much of what was popular at the time. The real shame is that the author only ever wrote the two. But to end on a positive note – they’re finally at your local library and you should definitely check them out in time for Halloween!

The Rim of Morning: Two Tales of Cosmic Horror

The White People and Other Weird Stories