Backcountry Weirdness: Who Fears the Devil?

June 6, 2016
Armed with only his guitar and his wits, a wandering balladeer encounters wonder and terror in the wilds of Appalachia. 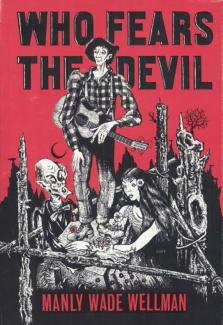 A quick glance at the table of contents reveals that the titles of these short stories - “O Ugly Bird!”, “Shiver in the Pines”, “Old Devilns Was A-Waiting”, etc. - immediately evoke the rustic yet mysterious nature of the material. Most of the collected tales were originally published in the 1950’s, and each of them concerns Manly Wade Wellman’s most well-known creation: Silver John, the balladeer.

Toting his silver-stringed guitar, John spends his days hiking the mountains of Appalachia in a continuous quest to “find out things”, and to track down any rumored but elusive folk songs he has yet to master. In addition to country folk, John frequently encounters various forms of supernatural phenomena and the occasional cryptid. Whatever the challenge, he unfailingly meets it with genuine affability, a song at the ready, and a firm belief in the power of good over evil.

Wellman’s career spanned over six decades, during which time he published numerous short stories and more than a dozen novels, and also contributed to mid-century publications like Weird Tales and Wonder Stories. The fact that he spent much of his later life in North Carolina is evident in the authenticity of the Silver John tales; the scenery, atmosphere, characters, and - especially - the language featured in the stories have the ring of truth and a sense of life experience. From the opening:

Up these heights and down these hollows you’d best go expecting anything. Maybe everything. What’s long time ago left off happening outside still goes on here, and the tales the mountain folks tell sound truer here than outside. About what I tell, if you believe it you might could get some good thing out of it. If you don’t believe it, well, I don’t have a gun out to you to make you stop and hark at it. Who Fears the Devil