Solemnizing Marriages Not-So-Solemnly: Humor from a Justice of the Peace

When two people got married in Nashville during the 19th century, it was not unusual for the officiant to write something like, “I hereby certify that I solemnized the rights of matrimony between the above named” on the back of the marriage certificate, and sign it. Some of these notes are wordy and elaborate, some are short and sweet. In the case of Justice of the Peace Willie Barrow, the notes also contained flashes of dry wit and sarcasm.

Barrow appears to have gone above and beyond the call of duty as an officiant by giving us some tidbits of information that we normally would not have. The certificate above reads:

“I certify that I married the within named persons at the house of Dudly Kingston on the evening of the 11th March 1819 being the evening after the steam boat arrived and while I was marrying the couple there was two fights in the yard. W. Barrow”

No doubt this wedding was a festive and exciting affair. Occasionally, Barrow would chime in with his own thoughts about the happy couple.

“April 14, 1825 Willie Barrow solemnized the wrights [sic] of matrimony between the within named parties on this day - and not very great Folks.”

That’s a shame. Other times, Barrow simply injected a bit of sarcasm into his notes: 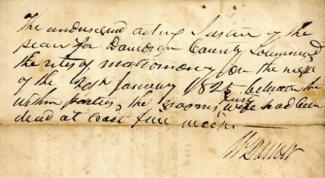 “The undersigned acting Justice of the Peace for Davidson County solemnized the rites of matrimony on the night of 20th January 1825 between the within parties, the groom’s first wife had been dead for at least five weeks. W. Barrow”

I guess sometimes five weeks is all you need.

Who was Willie Barrow, other than a dry-witted (and slightly jaded) Justice of the Peace? According to John McGlone in a 1989 article in Tennessee Historical Quarterly, Willie (sometimes Wylie) Barrow settled in Nashville in 1795. Other sources in our Barrow family file state that he married Jane Greer in 1799, and had three children: David, Alexander, and Jane.

A few years after he was widowed in 1802, Barrow married Anne Wilson Beck. Together, they had several more children, including the prominent soldier, newspaper editor, and politician George Washington Barrow. According to our will books, he died sometime in 1825.

While his family file tells us the facts, it is the routine notes on the backs of these marriage licenses that give us a small idea of his personality. As a Justice of the Peace, he appears to have seen it all – from wedding side brawls to inebriated witnesses to freshly-widowed grooms. And it appears that he took it all in stride with a healthy sense of humor.

Kelley Sirko is the program coordinator for the Metro Archives, which houses materials related to Nashville's government history. Learn more about Metro Archives.